(This is definitely a play on words that references one of my favorite Disney movies, as well as suite the motto for my RV trip, "Adventure is out there.")

In my efforts to downsize prior to moving into an RV... I wanted to do so in an environmentally friendly way.

I have 4 boxes addressed to different people with things I have been meaning to send and other things I think they would like.

I made a doggie bed out of clothes I don't wear, stuffed it full of shredded clothes and the stuffing from a pillow I cut up. (I feel like I have too many pillow I don't need, that are also very old...). I'm very happy she's got 3 dogs. This will help me a lot. The filling contains a lot of old clothes from my childhood that felt kind of therapeutic to cut up. It also ensured that I didn't try to retrieve them. It helps me know that my old clothes won't end up in a landfill if I happen to donate it and they don't take it. 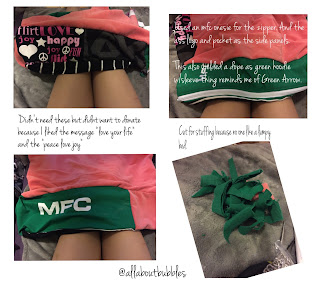 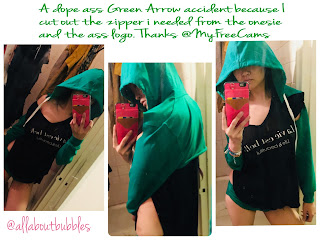 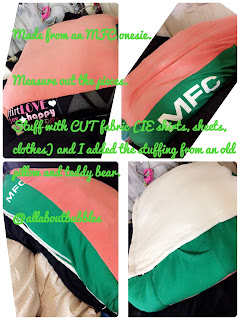 I was looking up things to do with old jeans yesterday.

Today, I was thinking that I need a pencil case like this for my makeup brushes and eyeliners, etc:

But the problem with this is that it's a fixed size and ideally I'd want one to fit my whole make up arsenal.

So here's my idea of the day, make my own pencil/makeup holder with a pair of old jeans and the elastic I have in one of my drawers. (If you do not own elastic, I've noticed from the doggie bed, is that there's elastic in a handful of pants).

Because seriously who's going to sit there and count the number of slots they may potentially need?

I always wanted a holder that is organized in the order I do my makeup, brushes I use first, then the pencils, brow, eye, lip. In that order... brilliant...

I'm going to leave this post "undone" will add some pictures later.

This is the story about a girl:

My first birth was a female named Eidi. (0-7)
She played well with the boys, but she played naughty with the girls.

Eidi evolved into a piano playing Butterfly Goddess named Elise. (6-12)
But Elise was weak, fragile. She got beat, broken, and scarred

Elise hardened into a Vampire: Lilith. (12-13)
Lilith was a rebel & a parasite but the mother of a succubus & an incubus: Joy & Eddie.

On her good days: she’s the daughter of Wonder Woman, currently on her path to being her own Wonder Woman.
On her off days: she's like Harley Quinn. In her mind she makes sense, especially with the Joker by her side, because together, THEY make sense. But she sometimes, unknowingly, leaves a path of chaos & destruction.

Eddie is a heterosexual, adolescent male incubus.
Eddie loves car, airplanes, the Beatles, Power Rangers, Pokemon, Yugioh, motorcycles & leather, sports, guns, racing, scotch  lingerie on women, snapbacks, comic socks, Harry Potter, bridges... loves them, building things, women, boobs, lots and lots of boobs on beautiful women. He's kind of a pig and can't say no to beautiful women. He digs hanging out with chicks like Katharine Hepburn/the idea of women like her, wants to wife Audrey Hepburn/the idea of women like her, but truly, any Barbie Blonde with tits and a pretty face will do, add a brain and/or humor = WIFE... NOT! (He wishes he can commit but he just can't). He fully takes advantage of the fact that he is in a female's body & does not think receiving consent from men and sometimes women, is ever an issue. He likes "forced porn", and loves the idea of being free and never having to commit.

On his good days: Eddie thinks he’s invincible like Superman.
On his weak days, he feels mortal like Batman.

Together they are slobs. They fight all the time because they like different things. They love threesomes (MFF/BGG), highly intelligent & creative but lack the tact for "superior" people skills... trapped inside an Asian woman.

Joy transformed into a unicorn: magical, mystical rare but Caged. (20-21)
Eddie comes out after Joy is free because he is a gentleman. He let's Joy get dick first, then he seeps out because he needs women.

This cage was named Bubbles. (21+)
Bubbles likes to keep ALL in line with abuse: verbal, psychological & physical when possible.

Joy & Eddie sneak out when Bubbles gets drunk. But they always paid the price when Bubbles woke up.
Perversion bursted the Bubble that kept Joy & Eddie locked, trapped & protected.

That's when Bubbles became simply Bubs…
But Bubs lacked the rainbow glimmer that Bubbles had. Bubs was a feeble shell. She couldn't keep it together. Until one day, she received a hint of guidance from a messenger: the Raven.

The Raven came to Bubs with a broken wing. (30+)
The Raven gave Bubs a Message: a message to look past Bubs, the membrane created to protect Joy & Eddie, go back to find the common ground, to look before that, and ask the inner most private hidden part of the Heart, what It wants.

Bubs pondered over the wisdom she learned from the Raven.
The Raven flew away when it's broken wing healed.

Bubs went to her safe place. She created a barricade to shield her from the world as she developed, and strengthened the walls of her cocoon.
Inside that cocoon, Bubs felt secure enough to become inactive and let Joy & Eddie out to play.

Joy & Eddie has their own artistic differences they needed to fight out.
They had to remember the sexual, perverse, rebellious and deviant nature of their birth: Lilith.

Lilith had to remember that before being a vampire she was actually a fucking Butterfly Goddess.
So when the cocoon broke open, it wasn't Elise who broke out, nor Eidi.

Out flew an artist, a hippie, dreamer, wanderer, creator, gypsy princess, a tomboy, pervert and naive child at heart.

We are not lost dear Spectator, we are just trying to Human with all the rebirths…
Because what You see, Her... She walks with all the spirits of Her reincarnations within the same mortal lifespan.

Be patient my Loves, We are on Our way.

Support The Time I Put into Sharing My Thoughts By Contributing:

Be the Max to my Nora!